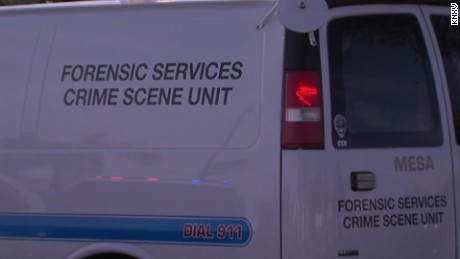 (CNN)Danielle Jacobs was public about her struggles with Asperger’s syndrome.

Last June, the 24-year-old woman posted a YouTube video of a breakdown in which she wept, berated herself and punched her chest until Samson, her service Rottweiler, jumped up and blocked her blows. Finally, she slumped to the floor and embraced the dog.

Police in Mesa, Arizona, say they didn’t know Jacobs had Asperger’s, a high-functioning variant of autism, when they shot and killed her Thursday.

Officers went to her home after receiving reports a woman was threatening to kill herself, Detective Estaban Flores said at a Friday news briefing.

Two officers were talking to Jacobs through an open door in the hallway when she emerged and lunged at them with a large kitchen knife, he said.

“At that point they felt their lives were threatened,” Flores said. Both officers fired their weapons, he said.

‘My daughter died asking for help’

Jacobs mother, Stacia, told CNN affiliate KPHO that police overreacted. She said nobody was in danger.

“My daughter died for asking for help,” she said Friday. “She was in her own place. And regardless of what she was thinking, what she was doing, she wasn’t posing a danger to the community. There has to be better way for law enforcement to respond and handle situations.”

Jacobs was diagnosed with Asperger’s syndrome in 2013, reported KPHO.

People with Asperger’s are often exceptionally intelligent and verbally gifted, but they also can be socially awkward.

They may react to stress differently and at times more emotionally than others not on the autism spectrum.

Like many people her age, Jacobs shared her life through social media.

In one YouTube video she described “stimming” — self-stimulating behavior such as patting herself on the chest. She read text from a cellphone and explains why she performs the odd, repetitive motions.

“I’m trying to calm myself from being overwhelmed,” she said.

In another video she sobs and says she’s distraught about learning vocational education workers wouldn’t continue to support her quest for a college education.

Jacobs and police had one previous interaction, Flores said, a call in which she complained about internet harassment.

“Other than that we had no indication of who she was or what her mental and cognitive abilities were at that time.”

After receiving the call, officers went to the house and were let inside by one of Jacob’s friends, Flores said.

While the two officers — one with training in crisis intervention — talked to Jacobs, a third went to his vehicle to obtain a “less than lethal” device, such as a bean-bag shotgun, Flores said.

Before that officer returned, Jacobs came out of the door with a knife with an 8-inch blade, he said.

They told her to drop the weapon but “she lunged extending the knife toward the officers from a very close distance,” he said.

Neither officer wore body cameras, he said. Both had stun guns but those devices “sometimes become ineffective when someone starts moving a lot,” he said.

Flores said the Mesa department had already increased the number of officers with training in crisis intervention.

“Officers receive enhanced training, focusing on how to identify and assist in situations involving individuals suffering from mental illness and cognitive disabilities,” he said.

The officers were placed on administrative leave.

“At this time we express our sympathies to Danielle’s family and her friend’s,” Flores said. “Obviously they’re going through a tough time right now — it’s tough losing somebody like this.”