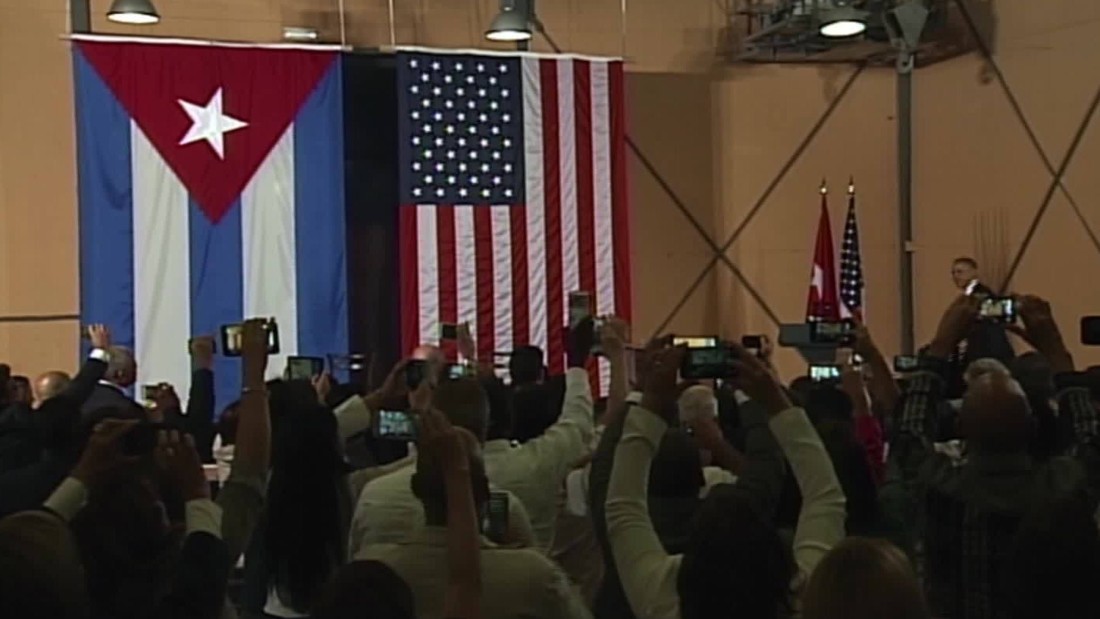 Havana, Cuba (CNN)As US President Donald Trump lashes out at US enemies and allies alike, many Cubans wonder which Trump they will face.

Will it be the businessman who said he wanted to open hotels on the communist-run island? Or will it will be the presidential candidate who, during his campaign, appealed to anti-Castro Cuban-Americans by promising to get tough on Cuba, even if that meant withdrawing the newly reopened US Embassy in Havana?
Friday, the White House indicated that a tougher posture could be in the works.
“We are in the midst of a full review of all US policies towards Cuba,” White House spokesman Sean Spicer said at the daily media briefing. “The president is committed to an agenda of ensuring human rights for all citizens throughout the world and as we review those policies in Cuba, that will be forefront in those policy discussions.”
Many Cubans seemed wary of increased sanctions and a return to frosty relations.
“We are watching him,” said the Cuban street performer known as Pillo, who entertains tourists in Havana by outfitting his dachshund with a Trump-esque wig and training him to growl when he says the President’s name.
“If Trump is tougher, he is going to find a tougher people here,” Pillo said. “The people will resist him here and he will be just one more that goes into history. He should loosen the screws, like Obama did.”

Cubans are still absorbing the rapid changes to their island’s relationship with their longtime Cold War-era adversary to the north that have occurred over the past two and a half years.
During his final term in office, President Barack Obama did more than the 10 US presidents that preceded him to change America’s confrontational relationship with Havana.
Obama exchanged prisoners with the Cuban government, reestablished diplomatic relations with Havana and became the first US president since 1928 to visit Cuba.
As he left office, Obama said the new relationship with Cuba ranked high among his foreign policy successes.
“If I had told you that we would open up a new chapter with the Cuban people,” Obama said during his final speech as president in January, “you might have said our sights were set a little too high.”
But critics of the new policy said the opening to Cuba was unwarranted, as the Cuban government still represses internal dissent and blocks political reform.
“Our recent engagement with the government of Cuba was not accompanied by any significant concessions on human rights,” Secretary of State Rex Tillerson said during his confirmation hearings. “We have not held them accountable for their conduct. Their leaders received much while their people received little. That serves neither the interest of Cubans or Americans.”
During a 2016 campaign speech in Miami, Trump was even more blunt, threatening to remove the US Embassy in Havana if the Cuban government didn’t meet his demands for “religious and political freedom for the Cuban people and the freeing of political prisoners.”
“Fidel Castro’s legacy is one of firing squads, theft, unimaginable suffering, poverty and the denial of fundamental human rights,” Trump said in a statement after the former Cuban leader’s death in November.

So far, Cuban officials have not responded to Trump’s salvos, privately hoping that even if US-Cuban relations don’t advance very much under Trump that at least he won’t roll back the progress of the Obama years.
In January, Cuban President Raul Castro said his government wished “to pursue a respectful dialogue and cooperation on topics of common interest with the new government of President Donald Trump.”
Until Trump makes the first move, though, Cubans and Americans who have invested in the island are waiting uneasily to see what will happen with the now-tenuous opening.
At his bustling Old Havana restaurant El Caf, Cuban businessman Nelson Rodriguez Tamayo looked nervously at the crowd of US visitors who packed his small establishment, one of the few that serves all-day breakfast.
“I get many, many Americans who come here,” said Rodriguez, who returned to Cuba from living in London to take advantage of the changes on the island.
The United States and Cuba “should have a good relationship,” Rodriguez said. “They can make business together, fair business. I think it should continue, but I don’t know what will happen with the new president.”
Cuban officials say that in 2016, visitors from the United States totaled 614,433, a 34% increase from the previous year. But if Trump retightened restrictions on Americans visiting the island, the boom would likely dry up.

US companies that have just entered the Cuban market are also concerned.
“We can’t speculate what will happen in the future,” said Galo Beltran, American Airlines’ representative in Cuba during the inauguration of the carrier’s office in Havana on Wednesday.
Last year, US airlines received permission to restart flights from the United States to Cuba for the first time in more than half a century. American will fly to at least six destinations on the island and employ a local staff of about 30, Beltran said.
But with Trump in the White House, it’s unclear if US companies once again will face increased restrictions on investing in Cuba.
“Our efforts will continue to be to go full steam ahead,” Beltran said, “in making sure our presence and our contributions will be maximized by bringing as much traffic as we can compliantly.”
In the meantime, many on both sides of the Florida Strait are anxious to to see what Trump Cuba’s policy will be.
“There’s a lot to do and there may be different ways to do it that are worth discussing, but we need to move forwards, not backwards,” said US attorney Scott Gilbert, who was involved in the secret negotiations that freed State Department contractor Alan Gross from prison in Cuba and led to restored diplomatic relations.
“It would be tragic to lose the ground that we’ve covered,” he said.